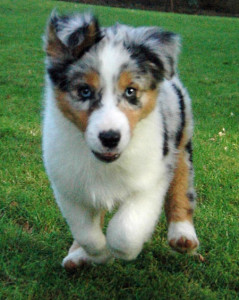 How y’all doing? I’m Daisy, an Australian Shepherd from The Woodlands, Texas. I like to play anywhere in the woods because it is all around me! I love it when my owners fetch me a stick and I can later on swim in Cokeberry Pond in my neighborhood. The best is when it is sooo hot out and I can swim and stay cool under the shady forest. I have a ton of energy and a place like The Woodlands is a great fit for me. That’s why when my owners removed and sold our furniture and packed all our suitcases, I was confused. Then, I figured out we were moving to a place called “The Land Down Under”; Melbourne, Australia.

Before the move, my owners bought me crate, that I would have to travel in on my flight. My owners first took this yellow thing called a tape measured and measured my whole body! It was weird, but this had to be done to see how big my crate had to be. The crate was pretty roomy and comfortable. I practiced staying in it to get me adapted before the trip. At the vet, I learned that there are a lot of requirements to go into Australia! The first time I got my rabies shot and microchip. At the second visit, I received my RNATT, the third visit they did a tick test on me to make sure I did not have any and the fourth time I had some blood tests. I still needed an Import Permit, USDA certificate a health exam for Australia, and a final check for parasites and other nasty things to make sure I didn't take them to Australia, and I still had to go to a place called a “Quarantine”. At the Quarantine Facility, I would have to wait 10 days to be reunited with my owners!!

Ahhh the time has come! The day before my flight, I was picked up from my awesome house that I will miss so much. The driver treated me well and brought me to the Houston airport. Closer to the time of the flight, I was not allowed to eat anything because it might mess up my stomach. A nice lady named Sherry played with me and made me feel less anxious about moving. Before I knew it, I was in the air, on the way to Los Angeles. I had to stop there before Australia because it made the traveling process seem shorter and made me feel less “trapped”. In Los Angeles, I was brought to a place where I had to stay for two nights! I did not mind this because I got to socialize with other dogs who were also moving and the people there were pretty cool. I also was examined by another vet to make sure I was ready to go to my new home in Australia. I saw a vet a lot over the past few weeks but they made the process of moving a lot easier for me! Two days later, I was on the flight going to Melbourne!

As I arrived at the Melbourne Airport in Australia, I knew I was not in the United States anymore! People had funny accents and were calling each other “mate”! I felt that I can connect to them though because I technically am an Australian Shepherd! Even though my owners were already settled into our new house in Melbourne, I was driven to a Quarantine Facility that was mandatory for dogs moving overseas to Australia. I was here for 10 days, but before you knew it, I was reunited with my owners in our new home! I was happy to be out of quarantine and ready to explore Melbourne. Who knew Melbourne was such a great place for dogs?! First, my owners took me to Albert Park which was beautiful and had a great lake, resembling the pond back in Texas. The amount of dogs here was crazy! I could not believe I made so many new dog pals in just one day. All the dogs were so welcoming and I met a lot that are the same breed as I am. Next, we went to Port Melbourne, a really cool beach where there were also tons of dogs! This had a great view of the bay and had a relaxed vibe to it. There was even a doggie cafe! Maybe moving to Melbourne, Australia was not so bad after all. I love the dogs here as well as the surroundings. See you later, mate!

Creating A Great Play Date For Your Dog In France

Dogs are social creatures, just like people. So naturally dog owners want their pets to have opportunities to socialize with ...
Read More

What Happens on the Day Your Pet Flies

All those weeks or months of planning, and the Big Day is finally here – it’s the day your pet flies to his new home. Is ...
Read More

Your dog adores you, we know. And he loves to do anything, and everything, with you. It’s all play to him. But, sometimes, he ...
Read More