Pet Travel Myths You Can Forget About 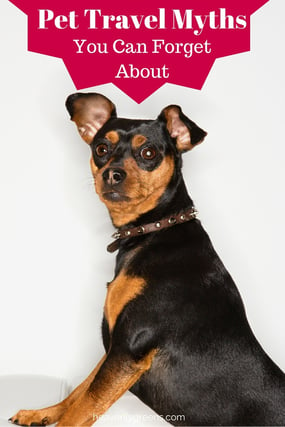 Some people don’t give a second thought to pet travel. Your dog loves to ride around with them, so it seems only natural to take him on vacation, even if it means traveling by air. Your cat isn’t big on change, but, hey, put her in a carrier and she’ll be fine. She travels to the vet, doesn’t she?

There is more to taking your pet on a trip than you might think, especially if it involves flying. Unfortunately there are many pet travel myths that just won’t go away, perpetuated by people who don’t know any better. There’s no need to fall into any of these pet travel traps, though. Read on, as we debunk several common myths you have probably run across.

Not necessarily. This depends on your pet’s attitude toward traveling in general as well as the length of your road trip. On the plus side, you can stop whenever you like to let your dog or cat have a little fresh air and stretch his legs. On the down side, you have to find pet-friendly accommodations, and spending several long days cooped up in a carrier in the car may ultimately put more stress on your furry companion than spending a few hours on an airplane.

Taking a long road trip with an unhappy pet won’t be much fun for you, either.

It’s a good idea to give your cat or dog a sedative before they travel.

Not so. The American Veterinary Medical Association strongly recommends against this practice, because it can do more harm than good. You’re worried your beloved dog or cat will be scared, so you want to help them relax. But drugs make them woozy, affecting their coordination and balance, their heart rate, blood pressure and ability to breathe easily.

The only way your pet will relax is if things seem normal, and none of these side-effects is normal.

All airlines have the same rules for pets.

Not so. Each one creates its rules, in every detail. If you and your pet are headed to a foreign country, note that every country has their own rules as well, and their requirements trump whatever the airline says.

You can just carry your cat or small dog on board.

Not so. Many airlines do allow small pets to ride under the seat in front of you, but the details differ from one airline to another. If you’re traveling internationally, some countries require incoming pets to travel as cargo regardless of their size.

Not so. More than 600,000 animals travel on airplanes each year, and the number of injuries and deaths is very, very small. Cargo compartments in which pets ride have the same pressurization and temperature controls as the cabin in which humans ride. Nonetheless, there are a couple of things to be aware of:

My pet has a current rabies tag and identification, so he’s good to go.

Not so. Even if your dog or cat is not leaving the country, some states require pets to have a current health certificate. You may not have to show it, but don’t leave home without it. If you’re going to Hawaii or a foreign country, you could need considerably more health-related documentation. It can take weeks or months to complete the required tests and treatments and obtain the paperwork.

Without the proper documentation, your pet could be refused entry or put into quarantine. This is not something you want to treat lightly.

There’s no reason to spend money on a “pet moving company.”

Maybe not. If you’re sure you understand the relevant airline/country rules completely and your travel plans involve just one, relatively short flight, you can probably handle the arrangements yourself. On the other hand, the majority of pet travel experiences are pretty complex. The time and frustration involved in researching and following the rules can be exhausting, not to mention every additional detail brings new opportunity for mistakes.

Besides, some airlines and destinations require you to use a professional pet shipper. And if you want to be certain you aren’t inadvertently misled by any other myths, consulting a reliable expert is the way to go.

What Pet Owners Need To Know About Pet Travel

Trying to figure out what you need to know to arrange pet travel can be a daunting task. If you’re moving and it’s not too ...
Read More

Although there are some similarities, every airline has a different set of rules regarding pet travel. If you are moving to ...
Read More