Send in your inquiries! A lot of clients are choosing to work with us for future moves. Since most countries require multiple months of work, there is a lot we can do right now and we're investigating new and creative solutions minute-by-minute to reunite and relocate our furry family members.

Stay In The Know 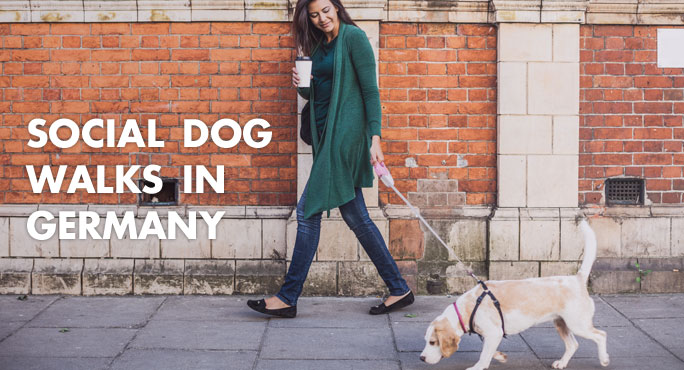 Spending time with your canine best friend is fun, relaxing, and great exercise for both of you. It can also be a great way to make new friends, if you look for like-minded dog owners to join in your activities. Many cities around the world now have formalized social dog walking groups. That’s a big relief if you’ve recently moved to a new country such as Germany and don’t yet know many people. Or dogs.

Germany is dog-friendly in a big way

Dogs are so popular in Germany, you’ll immediately be pleased to know that your dear Rex can go with you almost anywhere. Places he would have never considered entering in the US or UK, including pubs (and most restaurants), retail shops, and public transportation. Off-limits establishments include butcher shops (darn!), grocery stores, bakeries, pharmacies, restaurants that have an open kitchen, and sports or entertainment facilities.

Germany is also a country particularly known for its love of structure and rules. So, while dogs are widely welcome to socialize with their humans, you will probably find there are a lot more rules that govern those interactions than you’re used to now. One of the first things you’ll notice is that German dogs seem to be very well-behaved. That means you and Rex will need to bone up on local pet-iquette right away, so you can fit in without causing a stir. After all, you’re trying to make friends here.

A few key requirements to be aware of:

So get out there and get social!

Social dog walking groups are not only a great way for you and Rex to get your exercise, you can see the sights in your new city, and meet new friends – canine as well as human. Big cities and small burgs, the list of German towns that have meetup groups is very long. Good news, Ja?

Let’s look at Berlin as an example. First, as a reminder, there are meetup groups for almost anything you can think of to do with a group. But since we’re talking dogs here, you can check out Berlin meetup groups for dog lovers including:

Before you join a social dog walking group, consider whether Rex really wants to do that. If he’s the proverbial social butterfly, that’s great. But not all dogs are thrilled to meet other canines, and even some who are may become anxious at the sight of a large group of dogs and owners. That said, there are some social dog walking groups that promote general togetherness but do not encourage up close and personal dog-to-dog interactions.

You and Rex can discuss this over some cookies and a cold beverage. Perhaps in a German pub, where he will not be offered a beer but will likely receive a refreshing bowl of water to imbibe while he sits by your side.

Looking for something a little more, shall we say, personal, in the way of a meetup? Berlin is also a hot spot for Tinder-style apps that aim to match dogs. Single dog parents can join, too. Some of the apps offer broader dog-related services such as finding a pet sitter, while others are there strictly to help connect those lookin’ for love.

If you and Rex plan to go social in Germany, perhaps you should start learning the language. Maybe something along the line of, “Hi, there, come here often?” in both human and dog speak.