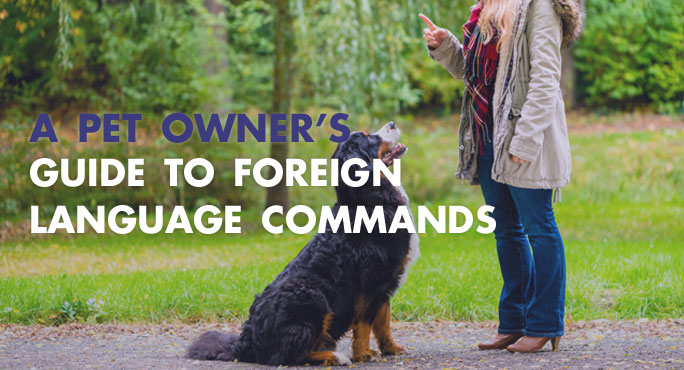 The ultimate in good pet-iquette anywhere in the world is a dog who is well-behaved in public. The least you can do is make sure your dog understands English commands. But what if you’re in a new country and someone else is speaking to your dog – or yelling at him? Is it for his own safety? Is he about to come face-to-face with some unforeseen danger? Or is he bothering them?

Let’s suppose you and your pet are headed to Italy. You’ll want to learn the details of appropriate pet-iquette in that country. But just think how helpful it might be to understand common pet commands, too. Aside from the fun of teaching your dog a new language (and learning a few words yourself), you’ll recognize what other pet owners are saying to their dogs.

For instance, dog-friendly beaches are increasingly common throughout Europe. Europeans expect to have big fun playing with their pooches on the sand and in the surf, but they expect decorum, too. With a dog who is under your control and the use of a few local commands, you and your pup are sure to impress.

More than one way to say something

Remember that there may be localized colloquialisms depending on exactly where you are. Spanish can differ considerably from one country to another, and French Canadian is not the same as Parisian French. It’s no different than regional differences within the US or the UK. So whatever commands you learn in a foreign language may not be the local favorites. And that said, in most languages, there is simply more than one way to make your point.

If you know at least a few commands, you will be at least somewhat prepared to interact with other dogs and owners wherever you travel. Visual clues will help, too. And you can always ask!

At least start with the most important commands: come, sit, down, stay (or wait). Then you can branch out with “protector” commands such as yes, no, drop it, and leave it. When you’re out and about with your pet, especially in a foreign country, you never want him to mouth anything you can’t quickly identify as OK.

It’s inevitable that pet parents want to reach out and pet other people’s dogs. Resist that urge until you receive permission. In France, ask, “Puis-je choyer votre chien?” Can’t recall the right wording for the country you’re in? Just make a petting motion with your hand and ask, “OK?”  They’ll get it.

Some dog training experts say it’s actually better to teach your dog commands in some foreign language. The thinking here is that English commands are also words you dog hears you use in other contexts. They aren’t necessarily directed at him. Foreign-language commands, on the other hands, are his alone, so he is more likely to listen up.

And then there’s your cat

Contrary to popular belief, it is possible to teach cats to follow commands. You can include your kitty in your foreign language lessons, and she’ll pick it up alright, but you may never know for sure. After all, when was the last time your cat did anything you told her to? Unless, of course, it was in her own – immediate – best interest?

The Japanese are notoriously smitten when it comes to pets. Where else (except possibly Disneyland itself) could you see a ...
Read More

Although it may seem that your super-smart pooch hangs on your every word and understands what you say, the truth is that ...
Read More

You don’t have to own a German shepherd to teach your dog commands in German! Heck, no. In fact, if your family is relocating ...
Read More