International Move? How to Avoid Pet Marking Behavior in Your New Home 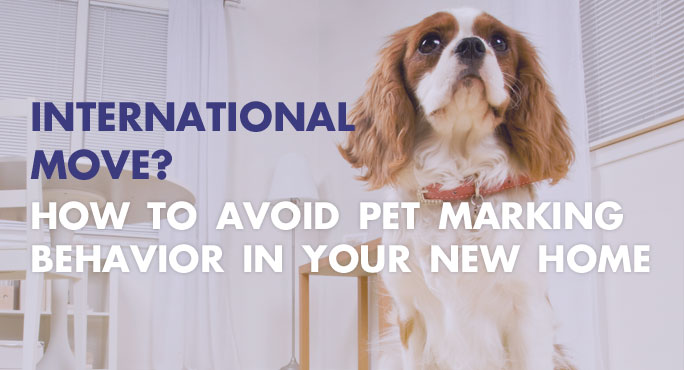 Check any list of the biggest stressors in life, and you’ll find moving. The bigger the move, the more stressful it is. International move? Off the charts. And if you think it’s tough on you, just imagine how your pets feel. You can’t expect them to simply take it all in stride. They may act out once you arrive. So let’s talk about how to avoid pet marking in your new home.If you’re planning an international move, at least you can understand what’s happening. You dog or cat sees that things are different, and they can feel your concerns. They’re concerned, too, because their daily routine may be disrupted. There are a number of things you can do to prepare dogs and cats for a lengthy move, including preparing them for an unfamiliar journey by airplane. But you want to think farther ahead, because you may see negative behaviors after the move.

The worst of these, from a human perspective, is marking. To avoid pet marking in your new home, you have to understand what’s behind it. Marking isn’t a matter of having accidents indoors, it’s about your pet laying claim to his new territory.

You arrange your furniture and other belongings in your new space, and – presto! – you’re at home in your new home. Dogs and cats define their territory with urine. It contains pheromones and other chemicals that speak volumes to other animals. To you, it just smells bad. You want to be understanding, but let’s face it. No one wants pet urine around the house. So what can you do?

First of all, know that unneutered cats and dogs are more likely to mark, although spayed or neutered animals may do it, too. (The reason for this is that urine tells others among the species which animals are available for reproduction. So for intact animals, marking serves two purposes.)

Dogs instinctively mark key areas within their territory to show what belongs to their pack. They tend to mark indoors when they feel insecure. Your new residence may or may not smell like a former pet resident, but it definitely doesn’t smell like your dog. Yet, he may want to fix that by marking the house and/or your belongings. (He’s marking you, too, so other dogs will know you’re his property.)

Cats do not appreciate change. So they may mark out of spite as much as insecurity. Since they are not pack animals, in the wild they mark to warn off other cats from encroaching on their territory. Indoors, cat marking often takes the form of spraying on walls or other vertical surfaces, rather than urinating on the floor, etc.

Clean it up, or it will continue

When pets can smell their marks, that encourages them to re-mark those areas. So clean up immediately. This is especially important with fabrics or other absorbent surfaces. Do not use hot water or steam, as it can set the urine enzymes instead of removing them. Do not use ammonia-based products – that’s self-defeating because ammonia is the primary component of urine itself. You can buy products specifically formulated to neutralize pet urine.

You can also try to keep your pet away from formerly-marked areas (to avoid repeat performances), or turn the tables and use those area to feed or play with them.

Help them feel at home

Give your pet plenty of time to get used to their air travel kennel before you move. Line the carrier with a small blanket or something else of yours or theirs. If it smells and feels familiar to them, they will be less stressed during their flight. And they’ll continue to have that “home” when they arrive at their destination. Bring a favorite toy and their regular food with you, so those details will immediately remain the same, too.

Spend time with them in your new home, playing and just hanging out. That will reassure your dog his pack leader is still in place, and reassure your cat her favorite lap is still available. Make sure they have plenty of opportunities to go outside, or that the litter box is fresh and accessible, so there is no reason for accidents. If you’ll be away for an extended period, put them in their kennel to help avoid pet marking in your home.

Be alert to potential marking desires or attempts, but never punish your pet for this behavior. For one thing, after-the-fact punishment is pointless, because they won’t have any idea what they did wrong. Yelling at them or rubbing their nose where they urinated will make them feel worse – alienated from you as well as stuck in unfamiliar territory. So stick with reassurance and cleaning up.

What You Must Know About Moving Your Pet To Hong Kong

Moving your household and pets to a faraway land can be a daunting task that involves intricate choreography of people and ...
Read More

How Can I Reduce the Stress of an International Move on My Pet?

There’s no question an international move can be stressful – for every member of your family, including your dog or cat. Here ...
Read More

How Much Time is Needed to Plan Your Pet’s Move to Another Country?

Planning any international trip can be a convoluted process. If you’re actually moving with your family to another country, ...
Read More