What Problems Could I Run Into Trying To Travel With My Pet? 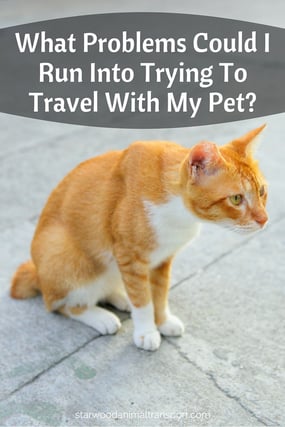 You don’t want to leave home without them, so if you will be traveling, you want your pet to come, too. To plan a successful trip, you should know about problems you could run into trying to travel with your pet.

This happens with lodging accommodations, and it happens with various transportation options, too. The only sure thing for pet travel is your own car. If you’re hoping to take the train, Amtrak allows pets only on a couple of test routes (and then only certain pets). Even a few airlines won’t take your pet.

Pets allowed, but not everywhere

For most airlines that allow pets, you can usually choose whether they ride with you in the cabin (if they’re small enough) or as checked baggage or cargo. But some airlines only allow pets in cargo, or only in the cabin.

Most airlines have heightened concerns about brachycephalic dogs and cats because snub-nosed animals have inherent breathing difficulties. Sometimes that problem can be exacerbated at altitude, even though the cargo hold where pets travel is pressurized and temperature-controlled. Your airline may restrict where your snub-nosed pet rides, which snub-nosed breeds are allowed or entirely embargo these animals. And no airline will accept dangerous dogs, though the list of breeds considered dangerous varies from one carrier to the next.

Generally speaking, airlines won’t allow animals to fly if the temperature at any point on their itinerary is under 45o F or above 85o F. If you’re traveling in winter or summer, this can dictate the time of day you fly. If the weather changes, your pet may not be allowed on their flight after all, which could create last-minute problems for your travel plans as well as theirs.

It is no longer considered advisable to tranquilize pets traveling by air. No airline accepts sedated cats or dogs.

No matter what type of carrier you use at home for your dog or cat, in order to travel by air they will need an extra-sturdy kennel that meets International Air Transport Association and USDA specifications. Assuming your everyday carrier will suffice will unravel your pet’s travel plans before they get underway.

You can’t get there from here

Pet size and plane size don’t always match. Suppose you’re traveling from Houston to the UAE. No problem, you’ve done it several times. But what if you don’t live in Houston, you live in Albuquerque? Your big, goofy lab needs a big kennel to travel with you, and it won’t fit in the hold of the smaller plane your airline uses for the ABQ-HOU route. You’ll have to improvise on your itinerary, and it will be inconvenient.

Every country has its own regulations regarding pet health documentation. Some countries and the State of Hawaii have particularly complicated requirements because they are rabies-free. No matter where you’re headed, if you don’t get the paperwork right, your pet could be refused entry. They could be stuck in quarantine, perhaps for an extended time. Worse, they could even be threatened with euthanasia.

Acquiring the necessary tests and treatments and the related documentation can take weeks or even several months. If you don’t start far enough in advance, you’ll have a serious problem.

Traveling with your pet requires researching information about individual airline rules and the pet health certification process. Unfortunately the right hand doesn’t always know what the left is doing. Well-intended blogs by pet parents or other third parties can be out of date, and airline employees and foreign embassy personnel are not always armed with the latest information. Things can change, and that can become a problem for you.

And, let’s face it, not every pet is thrilled by the concept of travel. Cats are not fond of change, and it takes practice for any pet to get used to spending extended time in a kennel. If your pet is elderly or has a chronic health condition, air travel or a multi-day trip in the car may not be in their best interest.

Virtually all these problems can be overcome. All it takes is advance planning so you know what to expect and your pet can be well-prepared for traveling with you. Your best source for information and assistance is an established international pet transport company.

In the end, your pet loves you as much as you love them. Whether they like to travel or not, they’d rather be with you. And when you reach your destination, you can settle back into a familiar routine, even if the setting is different. Problems solved.

Can My Pets Travel Together On A Plane?

**Content updated on October 19, 2021.   We know that you consider your pets to be part of the family. When you have multiple ...
Read More

Hotels and Airlines that Cater to Pets

Everyone who travels loves hotels that go out of their way to be accommodating. It’s the little extras that make us feel at ...
Read More

In the aftermath of Hurricane Maria, thousands of people are understandably anxious about returning to or leaving Puerto Rico ...
Read More